First you’ll want to make a party on party finder for dedicated cluster grinding. You want at least four people, with a full party of eight people preferable if you want to grind as fast as possible.

Next, take a look at the map here: 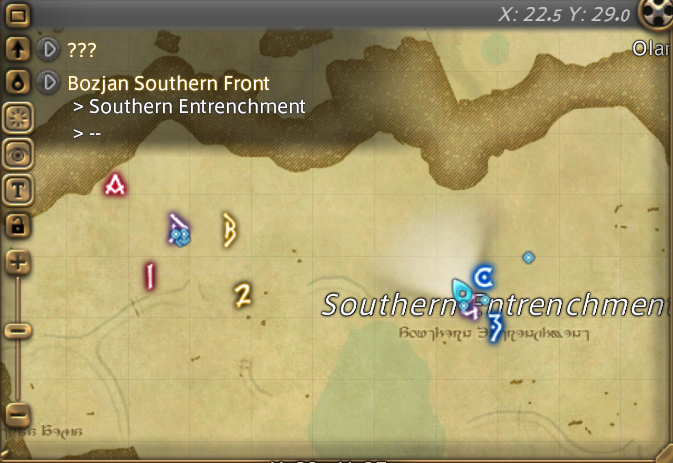 Four people from your party should be on “D”, while the other four should be on “4” (where I am in the screenshot). One tank and one healer to a group, and two DPS of any color (use Aetherweaver/Martialist if you’re green or blue). One of the players in each group other than the main tank should have the Paralyze lost action, which is an AOE focused on the target that’s big enough to hit an entire group of mobs at once. The tank in the group on the left will grab the mobs between A and 1 and drag them back to D, then grab the mobs between B and 2 and drag those back to D. The tank in the east group will start at C, move around in a semicircle to the east and back to 3, then pull the mobs to 4. Each group should use Paralyze to minimize damage to the tank and the frequency of AOEs.

The only real threat is “The Hand”, a move that the hand robots have. This is a frontal cleave with no ground marker that can be avoided by stepping out of the way once the cast bar starts. Tanks should stand to the outer edge of the group of mobs to face them away from the rest of their party so they don’t get clipped by this AOE. The hand robots will not adjust to hit the tank if they move out of the way, so tanks can move to avoid damage too.

The respawn time for the mobs is quite fast. You’ll get about 5 to 10 clusters every couple of minutes, plus a lot of memories for the relic if you have the quest up. If you can’t get eight people, then just focus on the west side.

I farmed out two mounts and an emote in just a few hours yesterday with this method. Enjoy your mounts/emotes/haircuts/whatever without paying millions of gil for them.

Crimson Desert – Is It An MMORPG? Gameplay Revealed – 2020

BEGINNERS GUIDE/HOW TO USE YOUR GEMS WISELY | Mobile Legends Adventure

Shares
Share This
Go to mobile version
Skip to toolbar
We use cookies to ensure that we give you the best experience on our website. If you continue to use this site we will assume that you are happy with it.OkPrivacy policy