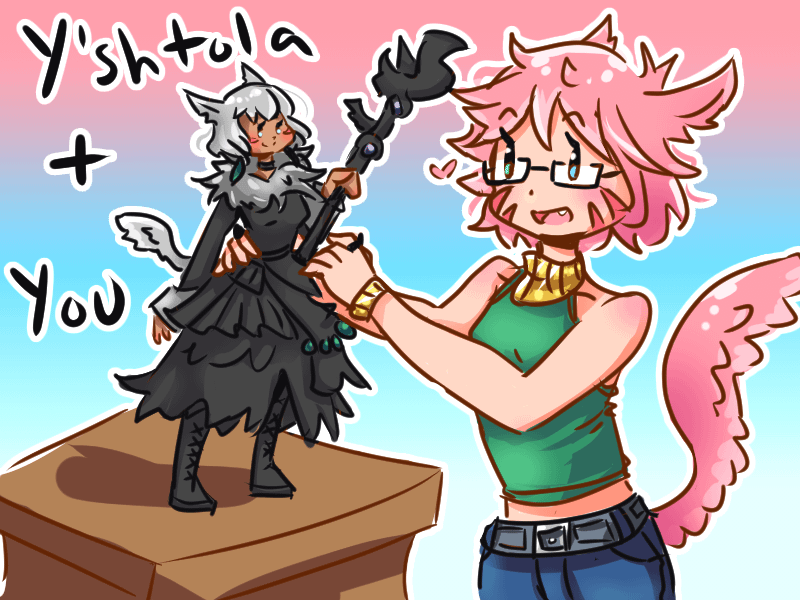 Hello fellow WoLs! I saw the announcement for the new Y’shtola Dollfie Dream, and I was over the moon that one of my favorite doll companies collaborating with one of my all time favorite games, but I noticed that a lot of people don’t exactly share that same sentiment. To most people outside the doll hobby, the announcement of this particular piece of merch might be a bit of a head scratcher, so I wanted to make a quick little post about Dollfies that might answer a few questions as well as give some insight into a passion of mine, which is doll collecting. This won’t be a completely comprehensive guide, but it should help with the basics.

EDIT: Any doll lovers or collectors, please feel free to add your advice and opinions as well, I’d love to hear them! ^^

So, what the heck is a Dollfie Dream?

A Dollfie Dream is a line of articulated vinyl ball jointed dolls made by a Japanese hobby company called Volks, who started out as a plastic model company but became mostly known for their vinyl and resin ball jointed dolls as the years went by.

Dollfie Dreams (or DDs) themselves come in three sizes, 45cm (Mini DD), 50cm (Sister DD), and 60cm (Dynamite and other standard models, this is the height Y’shtola will be) and are comprised of multiple vinyl parts over an ABS plastic skeleton that help maintain the shape of the doll and facilitate the dolls articulation.

Here’s a basic, blank dollfie, as you can see there are a bunch of points of articulation. Picture taken from the Volks JP website.

Each DD is fully customizable to the point where you can switch out their eyes, wig, clothes, makeup, and even body parts. Most people who collect DDs may customize their dolls by turning them into original characters, or using them as models for photography or sewing, or just to have as a high quality art piece to display in their collections.

Why a Y’shtola Dollfie Dream?

While Volks does have their own characters for sale in their Dollfie lines, they also often collaborate with other companies to create dolls of popular anime and game characters. Some recent examples being Emilia from Re:Zero, Lina Inverse from Slayers, and 2B from Nier Automata.

Volks also has a tendency to create multiple characters from the same series once they have the rights, this means we may even get Minifilia or Gaia dolls in the future!

Who is this product for?

The short answer: everyone who wants to own a Y’shtola Dollfie Dream : ]

The long answer is a bit more complicated. I think one of the big questions the FFXIV community has is “who would ever buy this thing?” Dolls are weird, it has a crazy price tag, (more on those two points later), and most people don’t even know what to do with it. Well, I personally believe this was more of a product aimed at Dollfie/BJD/figure collectors first and the FFXIV community second. In my eyes, Volks was just releasing another limited fullset (includes all the things, wig, eyes, clothes accessories, etc.) doll and it just so happened to be Y’shtola and thus ended up on the radar of the FFXIV simply by virtue of being a piece of FFXIV merch.

Why is she so FREAKIN EXPENSIVE???

Weeellllll, expensive is relative considering most limited DDs of any anime or game IP are generally around the same price as this Y’shtola release.

This is gunna be a big point of contention, but the basic answer for the price is royalties and the fact that every doll is hand assembled and made to a ridiculously high standard of quality. Royalties and just acquiring the rights to a character take up a big chunk of a budget when Volks produces a doll of someone else’s IP, but the other chunk is made up of the costs of designing the doll, the head sculpt, the clothes, eyes, accessories, wig, and then making the metal plates that are needed for the new head sculpt and for any painted part of the doll that needs to be masked off during the faceup (painting the face) process. After that, each doll is hand assembled and painted, much like any other high quality anime figure. The doll is more of an art/display piece than anything else. As a side note, the tan color of Y’shtola’s skin tone also add in a bit of expense just because flaws and mistakes in darker vinyl show much more easily than lighter skin tones.

Another thing you’re paying for (the main reason I buy a lot of dolls secondhand) is just for the Volks brand, which is a designer brand in the doll market since Volks has been around for a relatively long time. Much like a set of Double Masters in MTG or a pair of designer shoes, ball jointed dolls are considered luxury products and the Volks brand is up there with some of the most luxurious outside of smaller boutique independent artist dolls. It would be very difficult (as has been shown in the response of the doll’s announcement) to market this product to the average Joe on the street, but to those who are already in the market, this product is just the latest and greatest from a company who has already been pumping dolls like this one out for almost two decades now.

Why does she look so….weird?

This, of course, is subjective, but I can see where people are coming from when they say Y’shtola looks a bit off. Volks has a very distinct style and tend to soften the features on their sculpts. This helps to keep consistency in their doll lines, as well as the fact that the same sculptors are working on all these sculpts, so they’re going to all look like each other after a while. I think they chose to go with a more semi-realistic sculpt than a more anime sculpt, much like they did with 2B (which you really notice when she doesn’t have her blindfold). Volks usually reserves their more “realistic” features for their resin doll lines, but since Y’shtola’s in-game design is more detailed than, let’s say, Lina or Emilia’s (from above), they’re going to try and add those more “realistic” features, which can come off as uncanny to a lot of people who aren’t used to it.

Ok, she’s uncanny and costs a pretty penny but I still might get one. What happens if I invest a grand into a doll, but I don’t want it in the future?

*Professor voice* Good news everyone! I can’t say this with any legal authority, so take it with a grain of salt, but rejoice! Your investment is secure!

One of the great things I love about collecting ball jointed dolls, is that it’s usually just money that you can pose and play with. Limited Volks sculpts almost always (like 98.5% kinda always) retain their value, especially if the doll is kept in good condition and has with all of the doodads it comes with. The second hand DD market is stronger than ever these days, and people are always on the look out for sculpts they missed out on since most limited characters almost never get a re-release, so it’s quite easy to sell an unwanted doll if you know where to post (facebook groups, forums, IG, reddit, etc). Limited sculpts may even raise in value after their release since the doll’s scarcity goes up, so you may even be able to make a couple bucks if you time it right.

That said, this isn’t a guarantee. Because this doll is an unlimited pre-order (as opposed to dolls that have to be bough via a lotto system or there’s a set release number being made), I’m not sure how many off these dolls are going to be brought into the market, so I don’t know if that will effect the second hand price. But, like I said, as time goes on, parts go missing, dolls get damaged or lost, and demand goes up, just like for any other collectable. Sooo, just keep those things in mind if you’re thinking about a solely financial purchase.

Like I said before, I’m super excited for this release. I’m into the more realistic DD sculpts and think Y’stola’s fullset is awesome! I’m always glad when two of my hobbies cross over and I’m always excited when more people discover the doll collecting hobby, even if it seems kinda weird at first. Volks products are always much more impressive in person so I hope who ever does get her is blown away by all her little details and posts as many pictures as possible!

Hoped this helped a bit! I’ll try to answer as many questions as I can, so if you guys have any just let me know!

Expensive, posable doll is expensive cause of royalties and brand name. Exciting release for doll collectors, not so much for the average WoL off the street.

FFXIV Quick Anima weapon Guide I wish I had. By: AnxiousAsriel

FFXIV Beginners guide to go from Level 1 to Regalia mount from upcoming FFXV event By: FemRoe4Lyfe

FFXIV Useful Resources for New Players & Anyone Else By: NoBreeches

FFXIV Tanking Guide To Help You With Anxiety By: tsjaytime

The PRO GUIDE to ASCENT MIDDLE – Best Spots, Angles to...

How to WIN EARLY on TANKS and POWER FARMING Junglers! –...

How to Play BIND like the PROS! – Valorant Guide ft....

My Secret To High Kills With The Sentinel Sniper Rifle (Apex...