I used the Interactive map: https://genshin-impact-map.appsample.com/#/ . It did the majority of the work for me.

Grinding for chests is a great activity to do while waiting for the Original Reisins. It will also boost your AL.

Grinding all the chests will take you a lot of time. So don’t get overwhelmed by the numbers.

Here is a small guide of how I managed it :

First of all, some tipps. 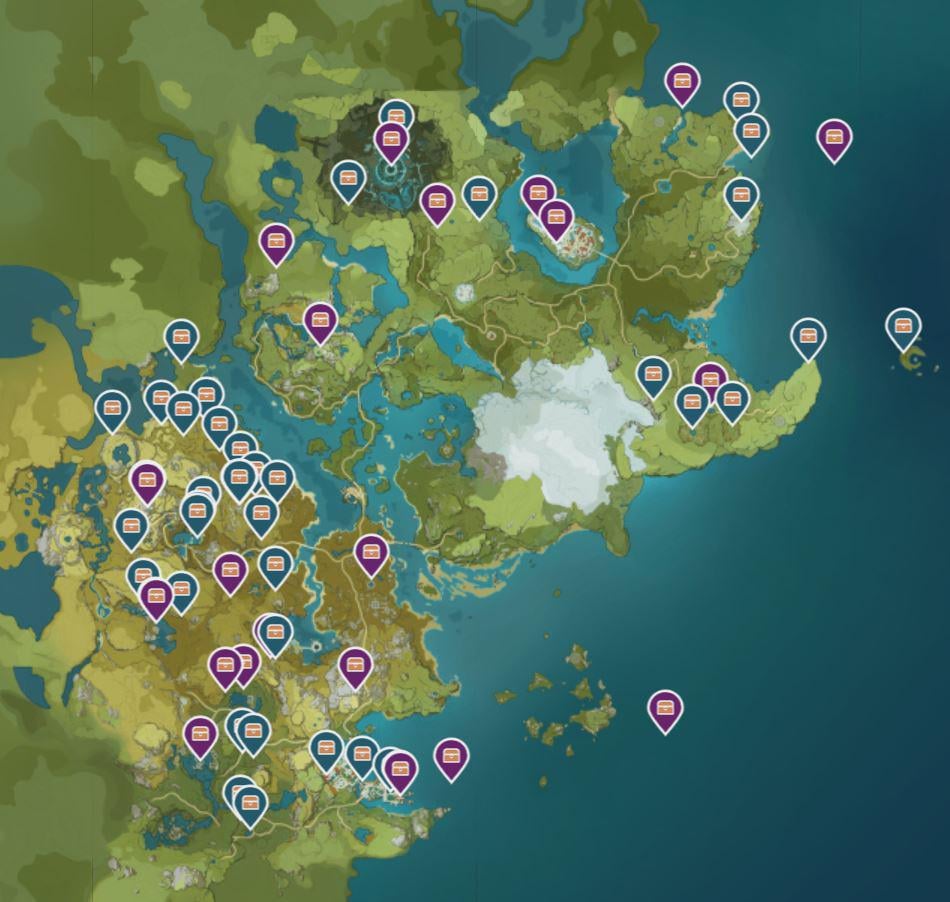 First, look out and search for every single Level 4 and Level 3 Chests, they are the most valuable of course and the amount doesnt sum up that much. 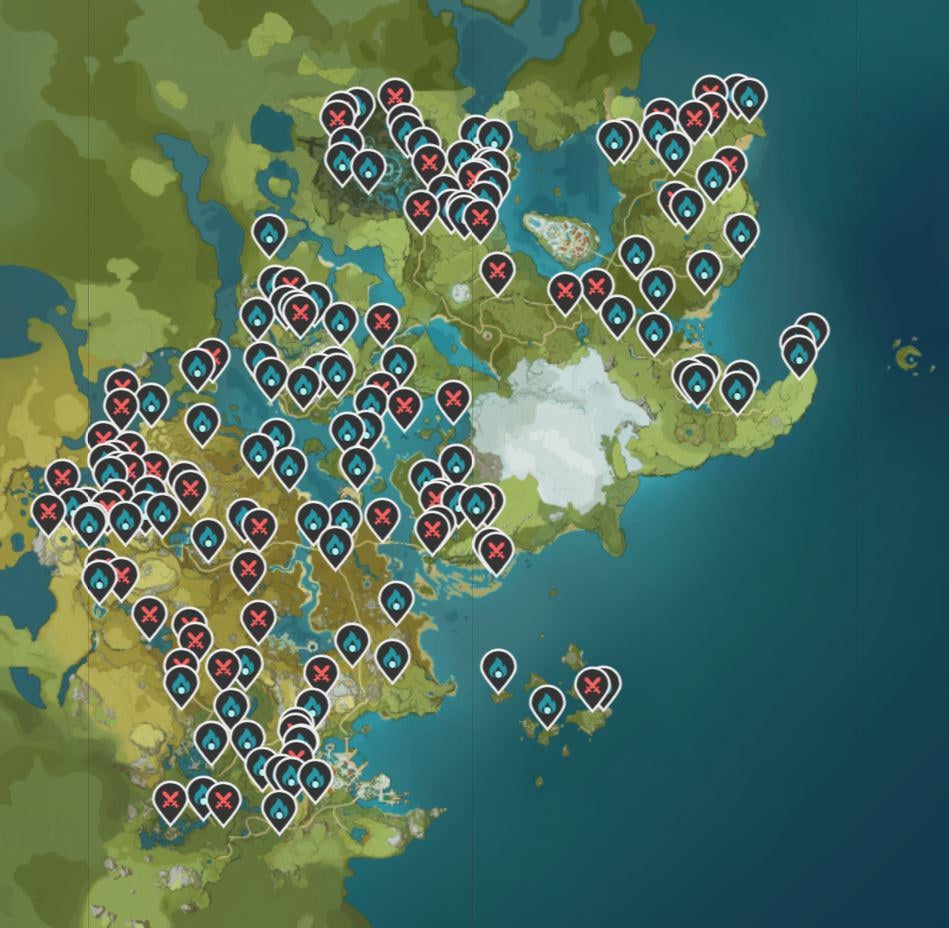 Next, focus on the Challenges and Seelies. If you have a Challenge you couldn’t beat yet, leave a pin for later. If you find an empty Seelie statue, use elementary vision to find the direction of that Seelie. 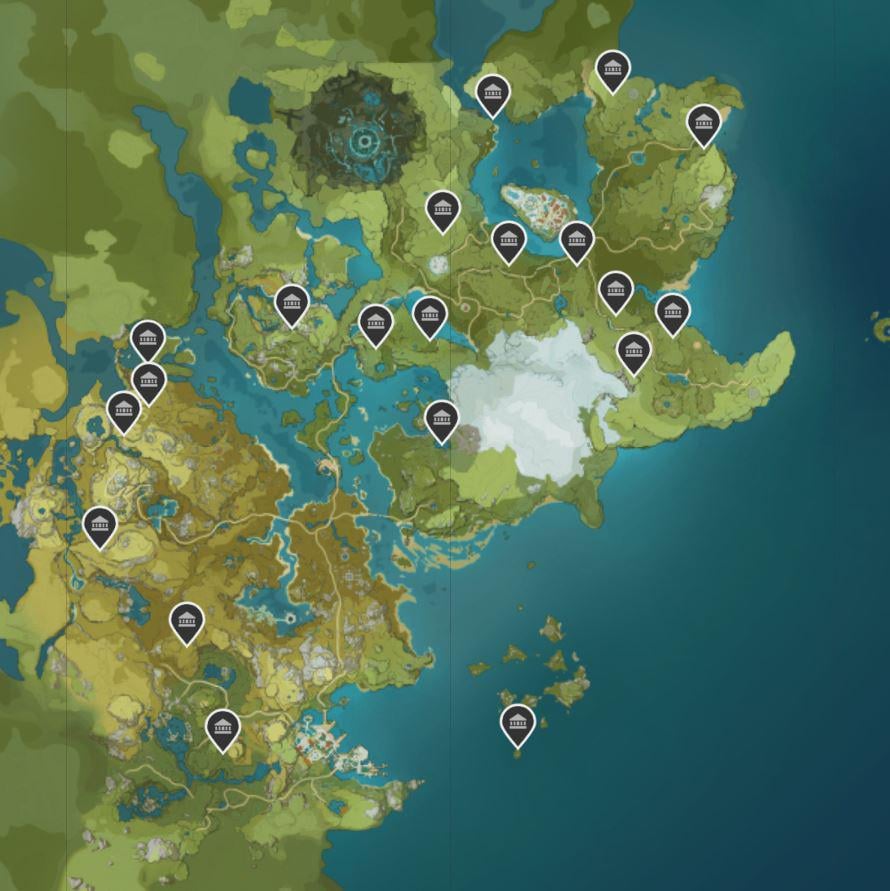 These 20 shrines will also contribute. So remember to get the key for them. 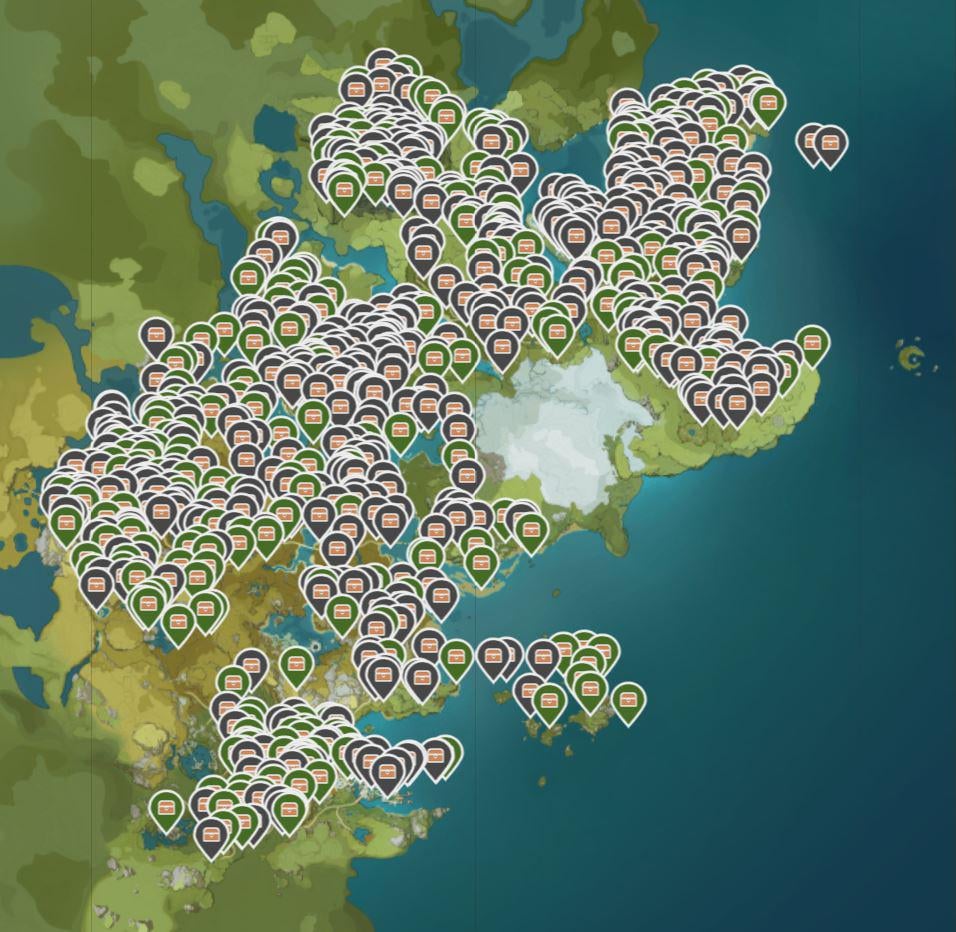 I apologize for my awful handdrawing in advance. 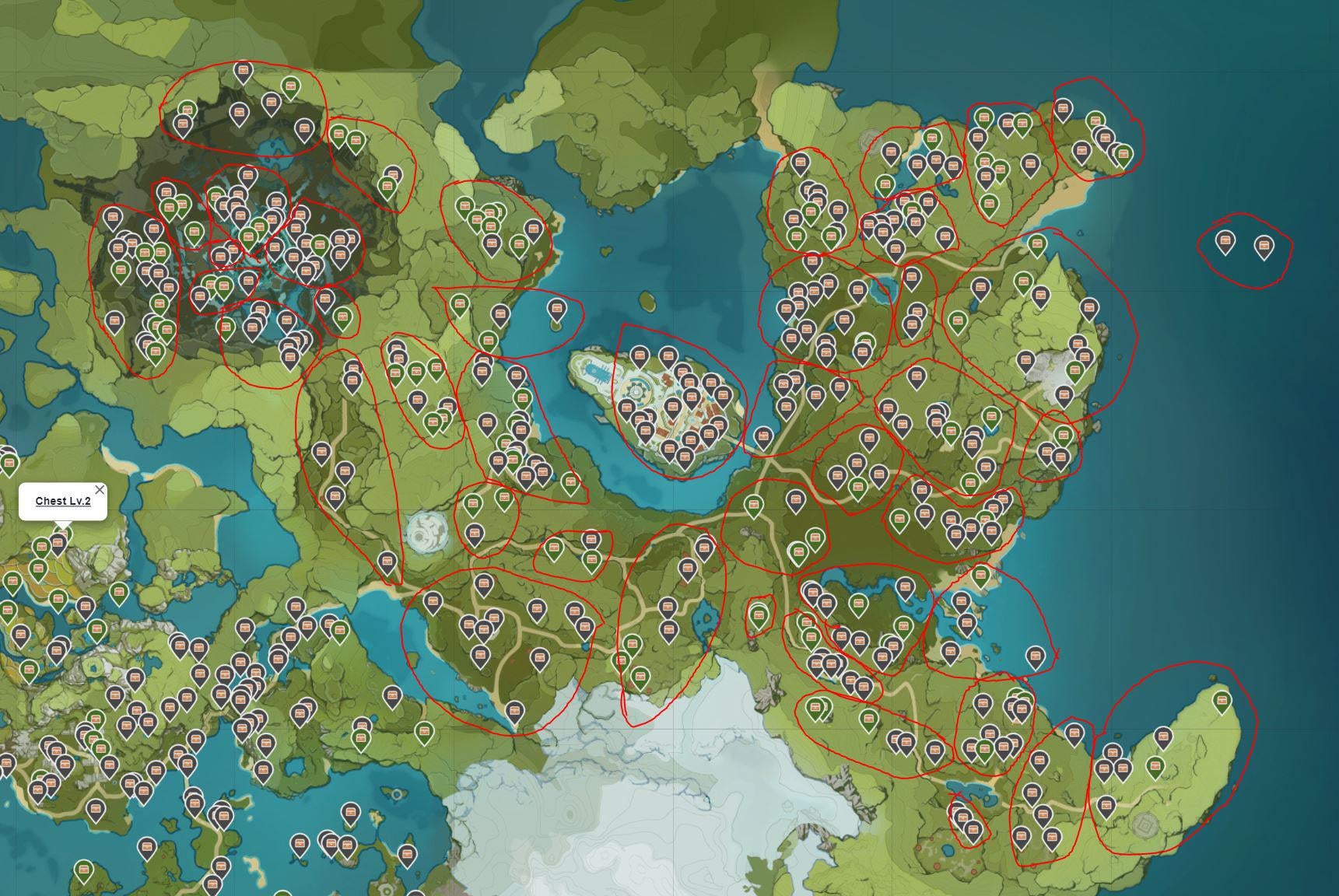 As for Liyue, the interactive map is still in the beta. Liyue is definitely not as detailed as Mondstadt. I doubt there are even 800 chests displayed there. In any case, there is definitely some sort of improvisation to find the chests. As an extra, there are these balloon plants, interact with them, shoot them, and you get a free chest.

Note : Bring MC Geo, it will be required in a lot of places. There are also some wind wheels, so you might need to switch back to MC Ameno or if you are lucky, use Venti or Sucrose. 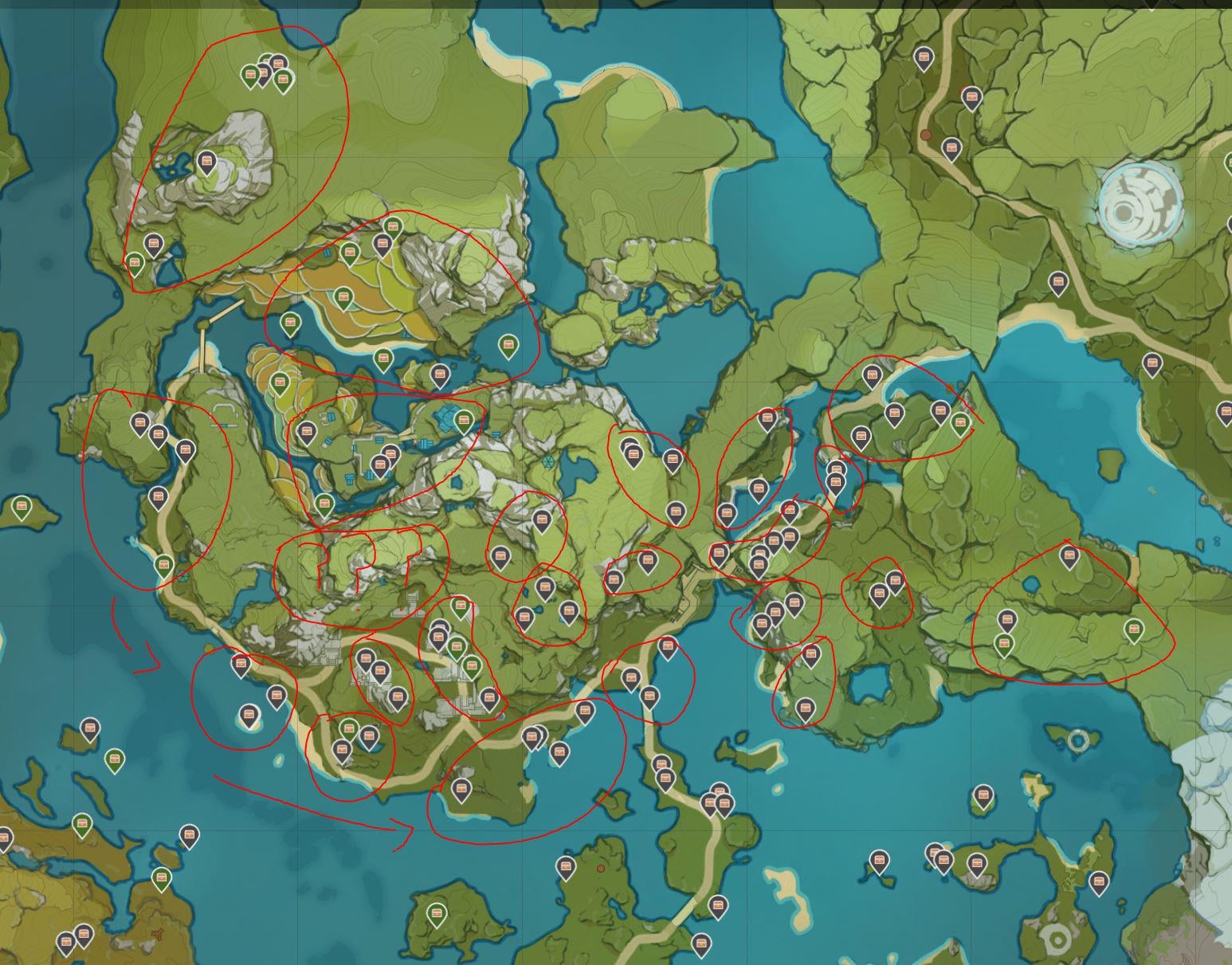 For the 3 Question marks between Qingce Village and Ruin, I am looking for any common chests which are hiding almost everywhere. As the map is certainly not as detailed as in Mondstadt yet. 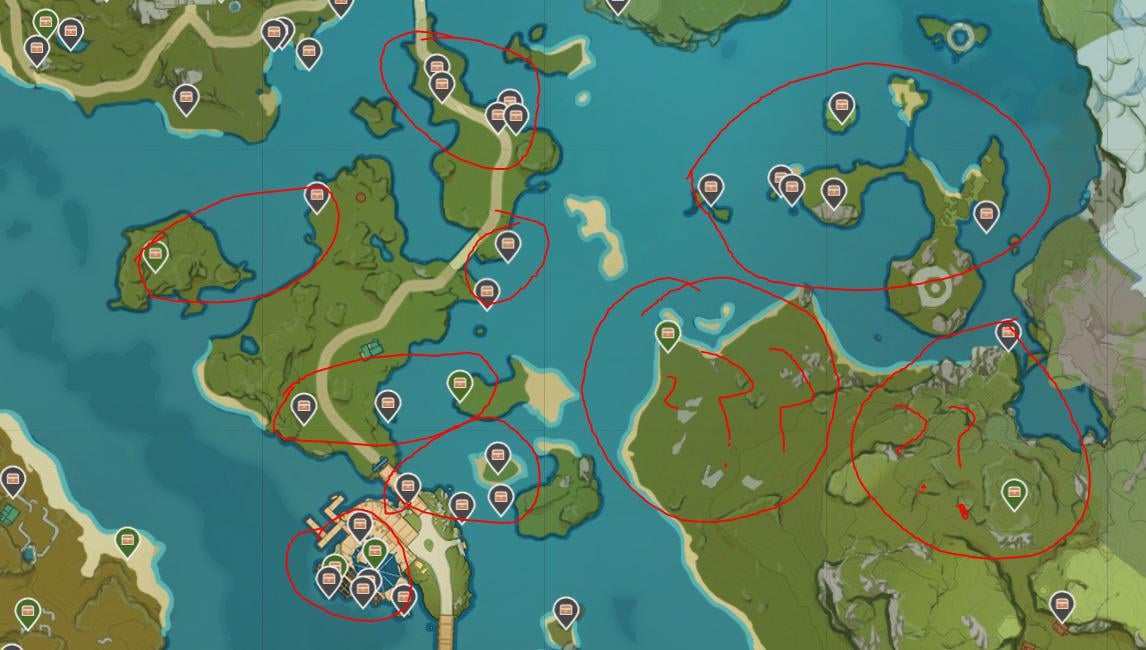 Wangshu Inn can be frustrating because of its verticality. Best Tip I could give is to glide down from the top and try to look for the common chests. Also try to swim around the Inn. 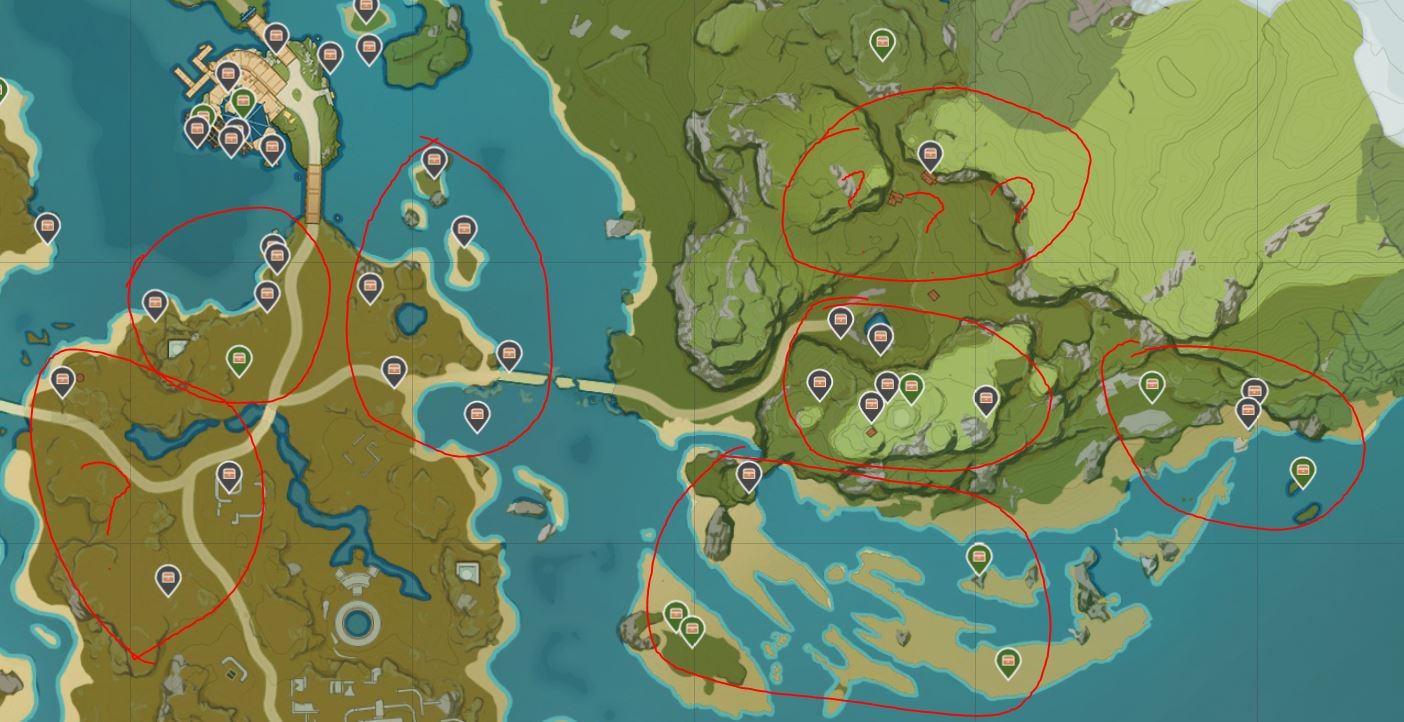 When you are at the Statue of the Seven on top of the Mingyun Village, go to the house at the west, there is a girl from the adventure guild who will present you a time trial challenge. Your goal is to beat the best time several times and you could win up to 3 chests. Also, a lot of chests at Yaoguang Shoal are half buried just like in any other coasts areas in Liyue. Don’t overlook that.

At the Guyun Stone Forest, same as Yaoguang Shoal, look for chests half-buried into the ground. Also, watch out on the Island west of the domain. There will be 4 Ruin Guards (+1 Ruin Hunter if you are there the first time), defeating them will grant you a Lvl.3 Chest. The Chests on the ship are at the top. 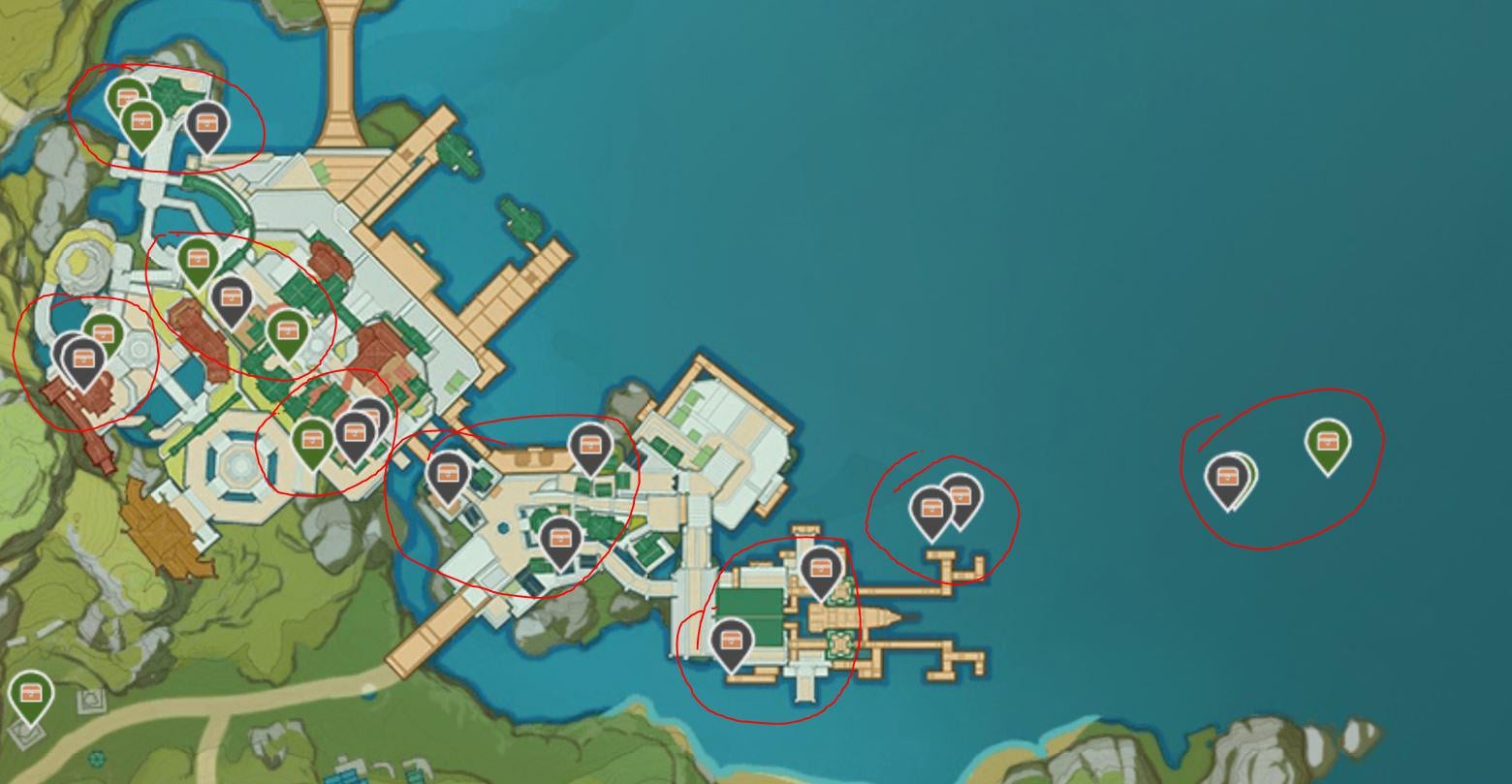 As for Liyue Harbor, with a lot of verticality like Wangshu Inn, look into every corner. Occationally jump down the bridges, there will be common chests. Chests on the Ship are mostly in the crow nest. 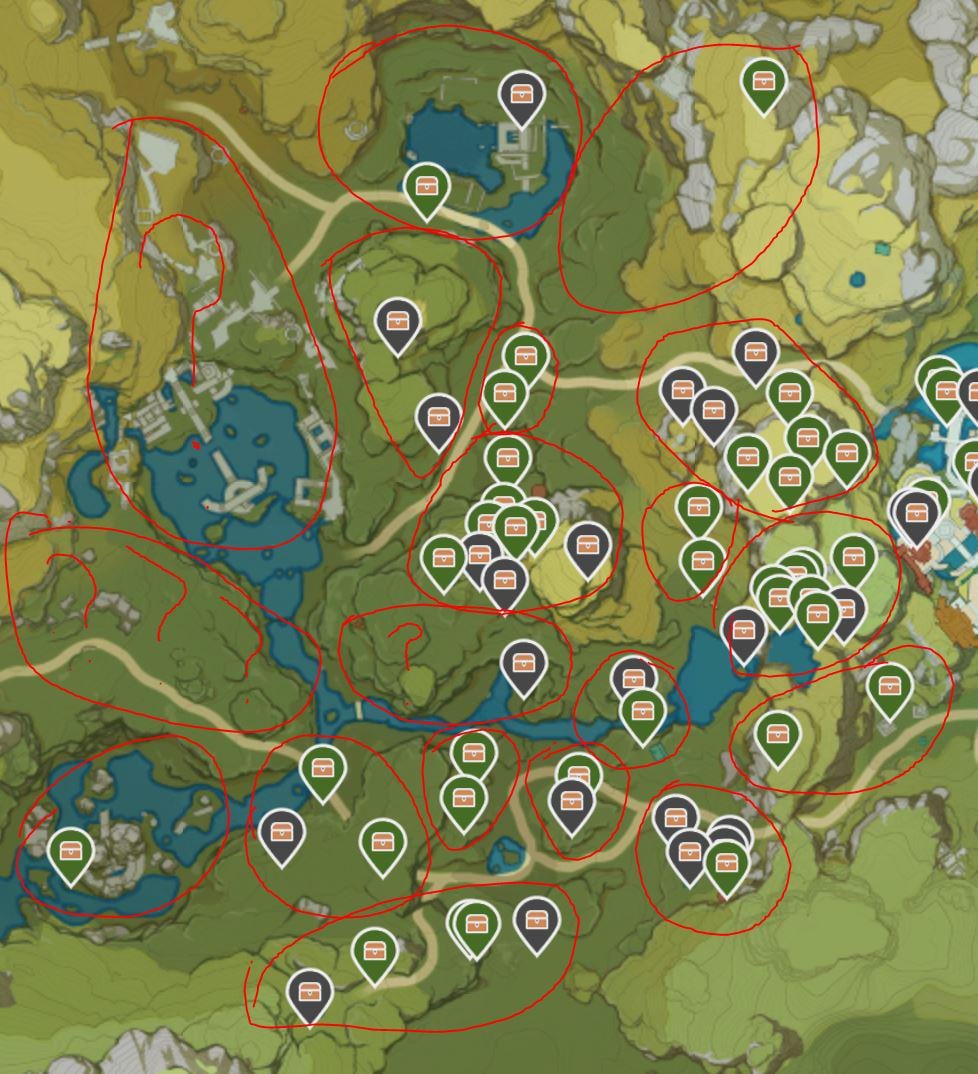 Chasm looks “completely empty”, but there are a few groups of mobs to defeat. Look out for tunnels in this area. Following the river is also a good strategy. 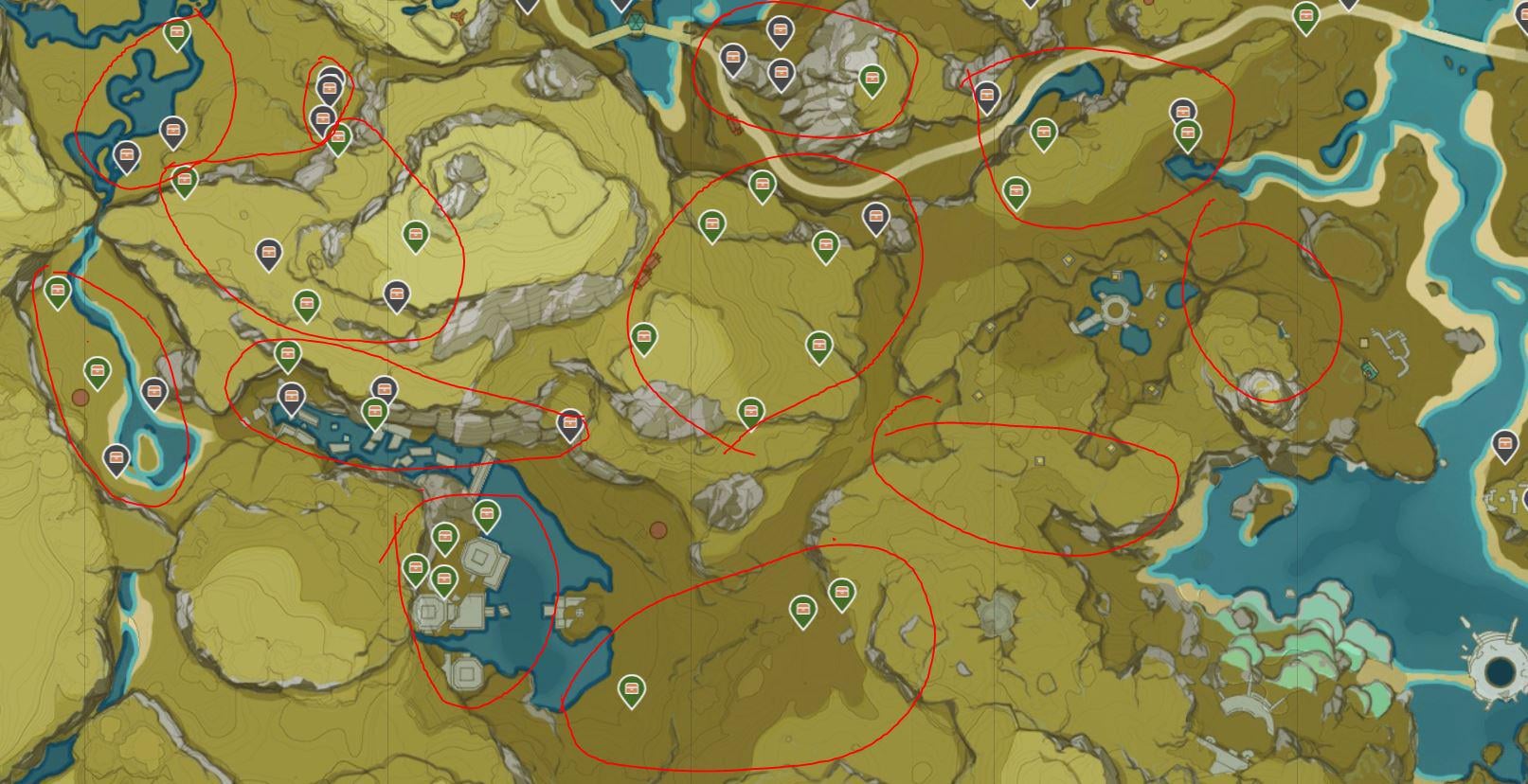 Definitely keep an eye out for the surrounding of Cuijue Slope, there are groups of Fatui Skirmishers and a few activation plates requiring MC Geo. 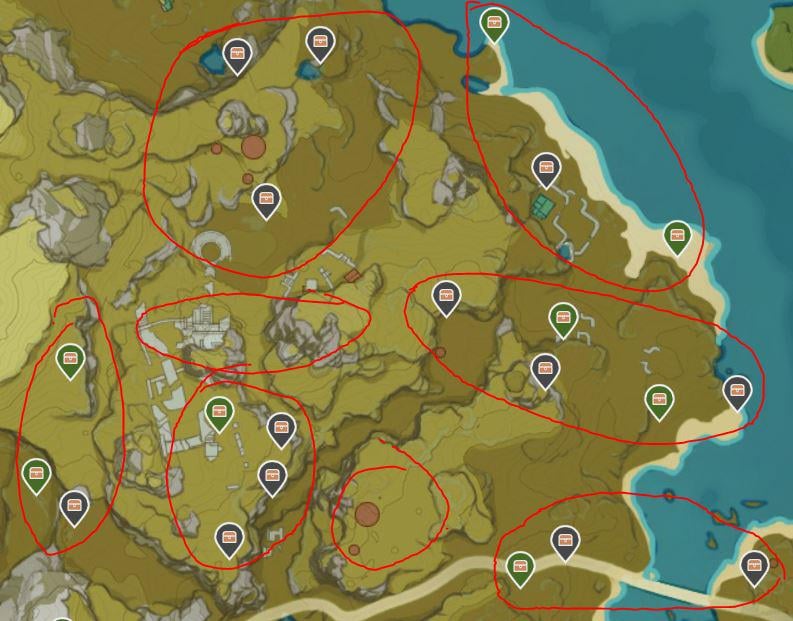 This is North of Cuijue Slope and East of Jueyun Karst. Keep an eye out for MC Geo spots. (Not only the round activation plate with lighting) 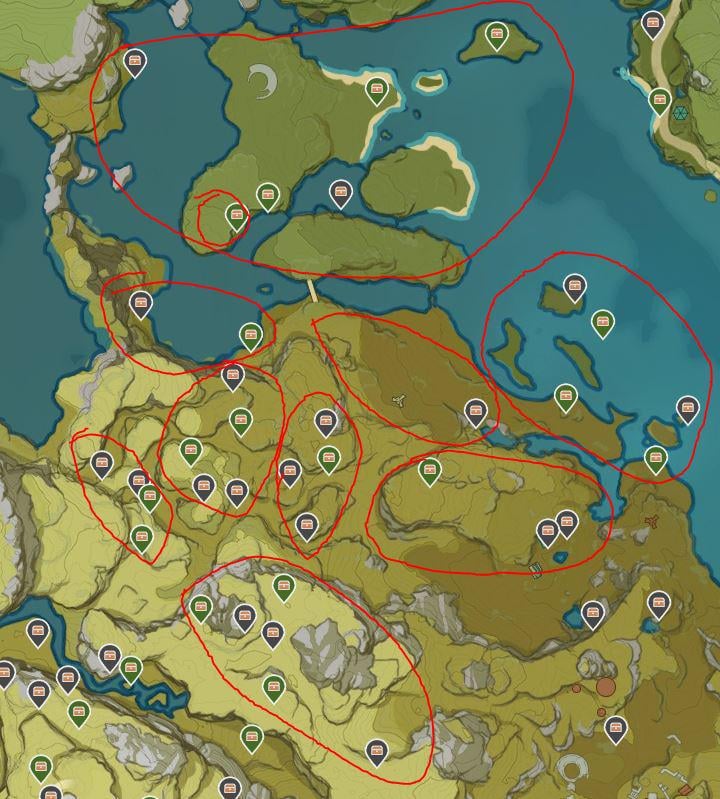 At the double circled area (top of the picture), the same girl from the top of Mingyun Village is there. She will provide you with more Time Trials, beat them all and you shall be rewarded with 3 chests. In the left-central area, where there is a huge tree, keep an eye out in the valley for the small trees with red leaves, you could mine there to get extra chests. Mostly, there will already be some treasure horders standing near them so be careful. Also, there is a tunnel under the huge tree. At the north side of the tree, there is a small circular monument (like the one from ruins) to interact with. Follow it’s steps to find an extra chest. (Tip: Bring Ameno for this one) 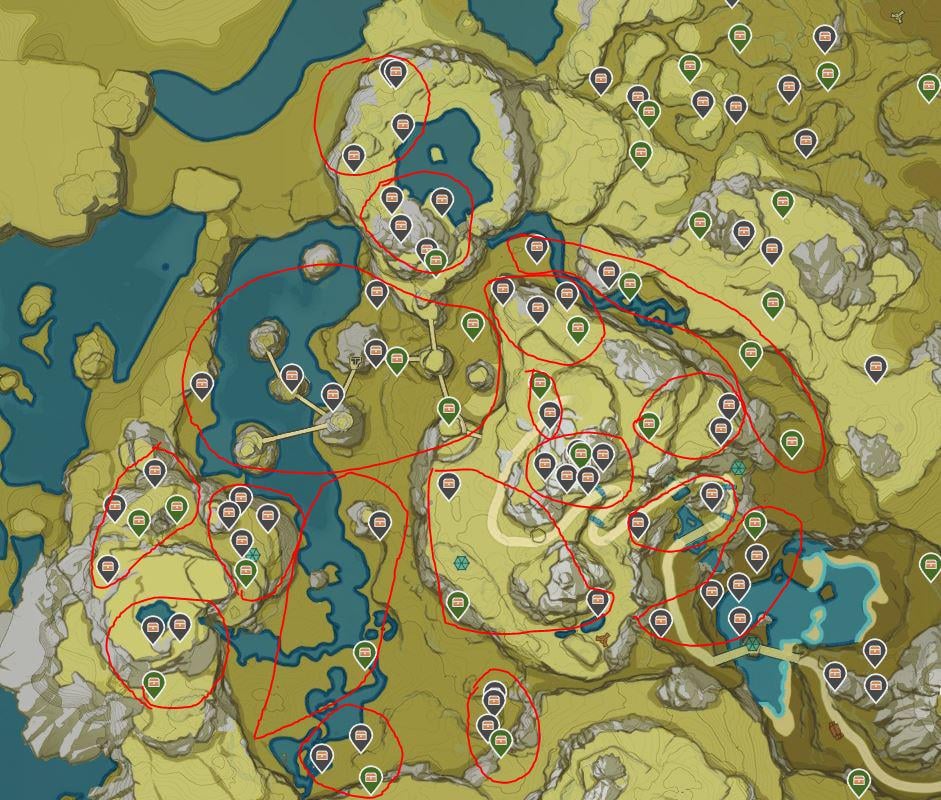 Now my personally most frustrating part. Be extra careful and mindful of the extreme verticality. There is a cave on the southwest side at the foot of Mt. Aozang. Most of the chest at Qingyun peak are at the top. Destroy as many amber as you can on Mt. Hulao. Like I said before, the map isn’t quite complete yet, so check every corner please. 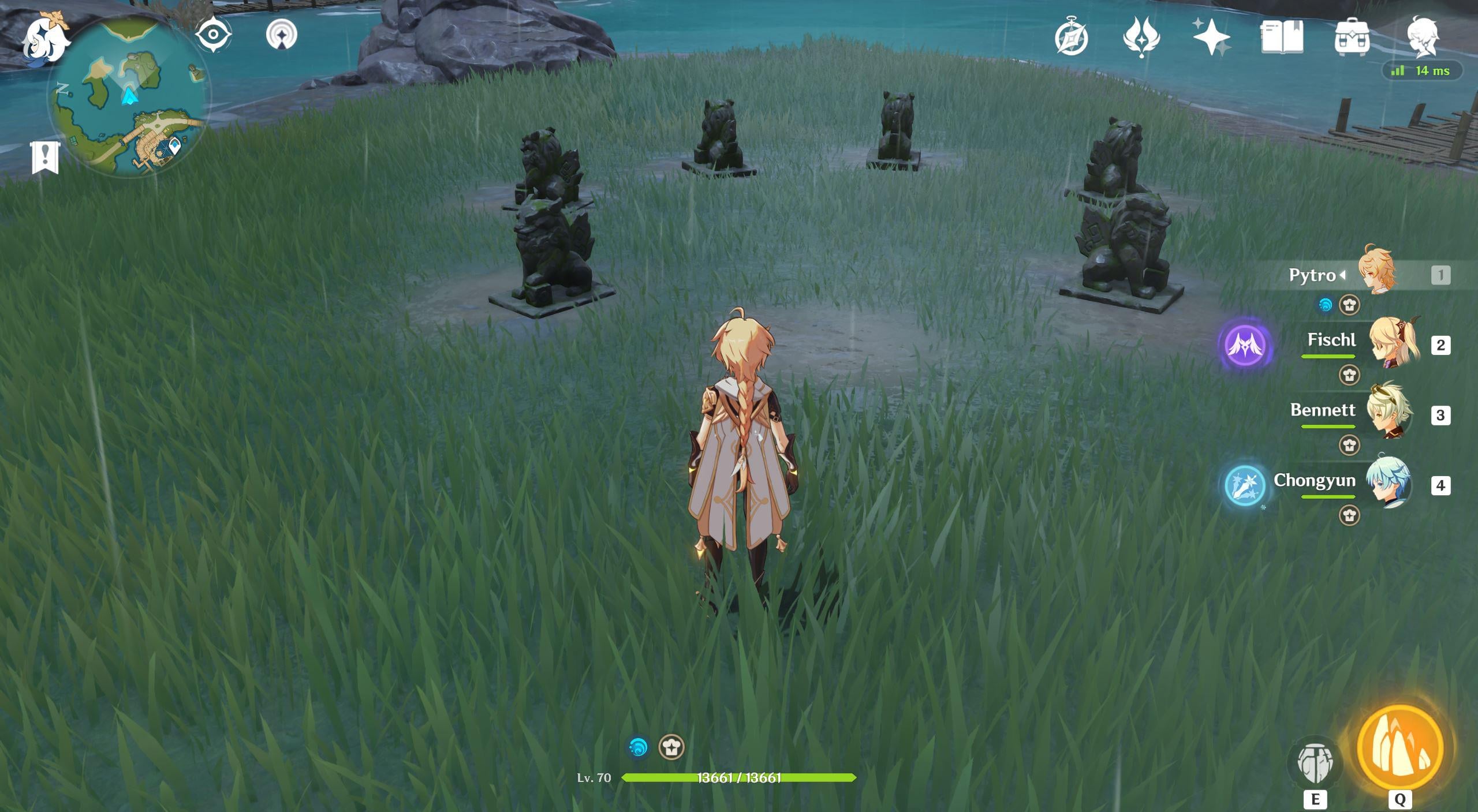 Look out for odd prop placements like this (This is east of Wangshu Inn). Also, look out for destroyable stone pillars (bunch of stones stacked on top of each others) – destroy them. 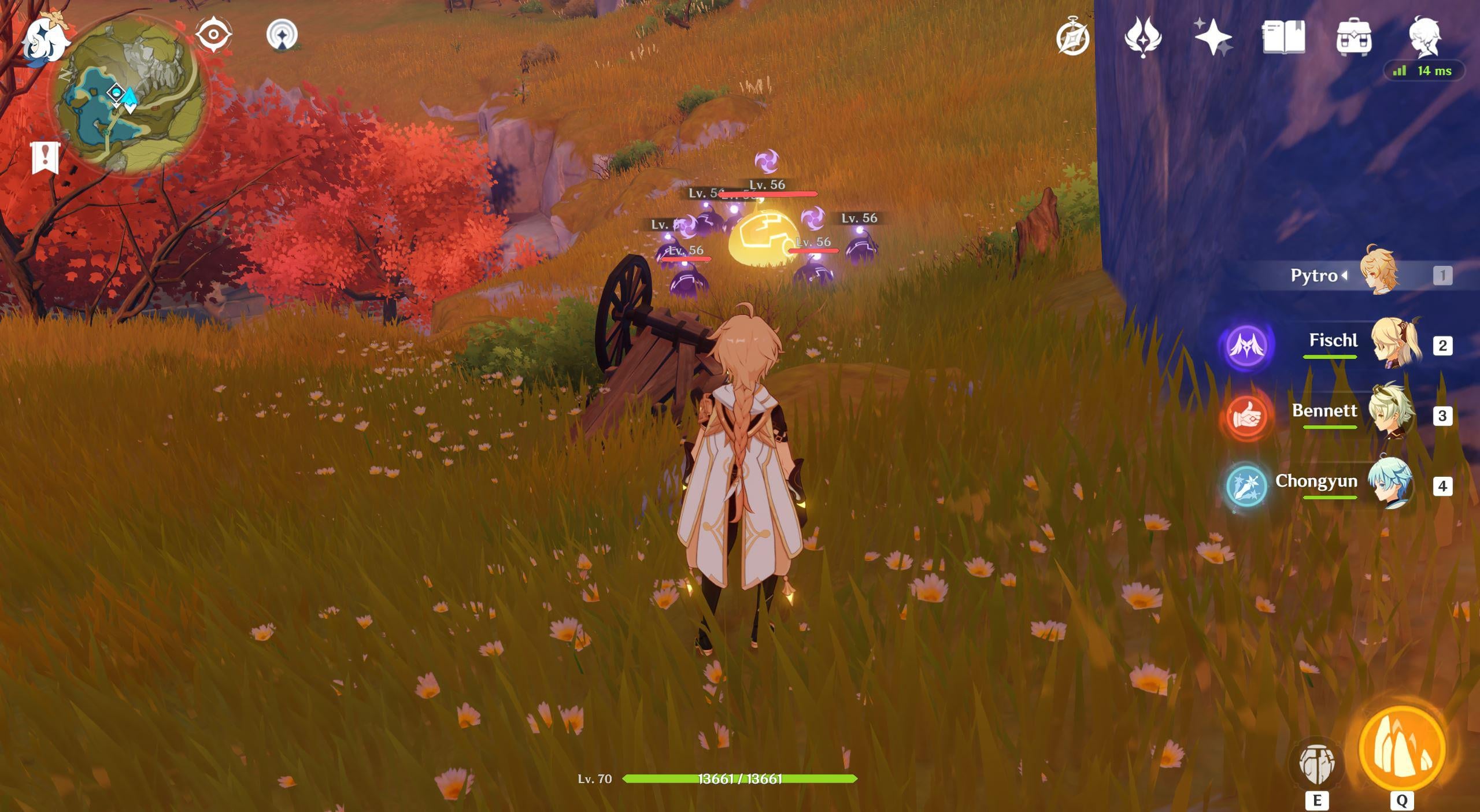 Defeating a huge amount of mobs like this will also spawn chests. (This is at the south side of Jueyun Karst) 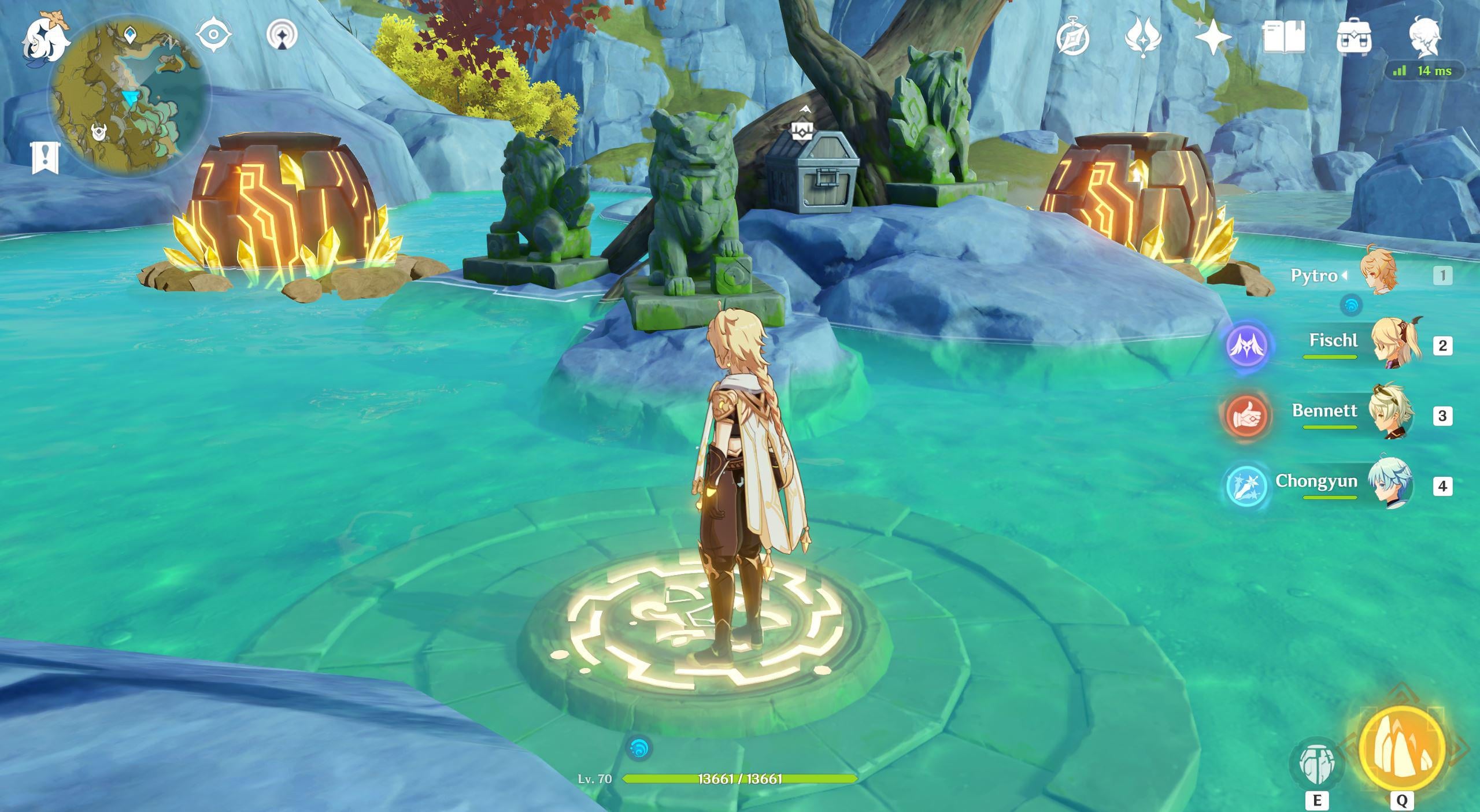 Be vigilante about these circles 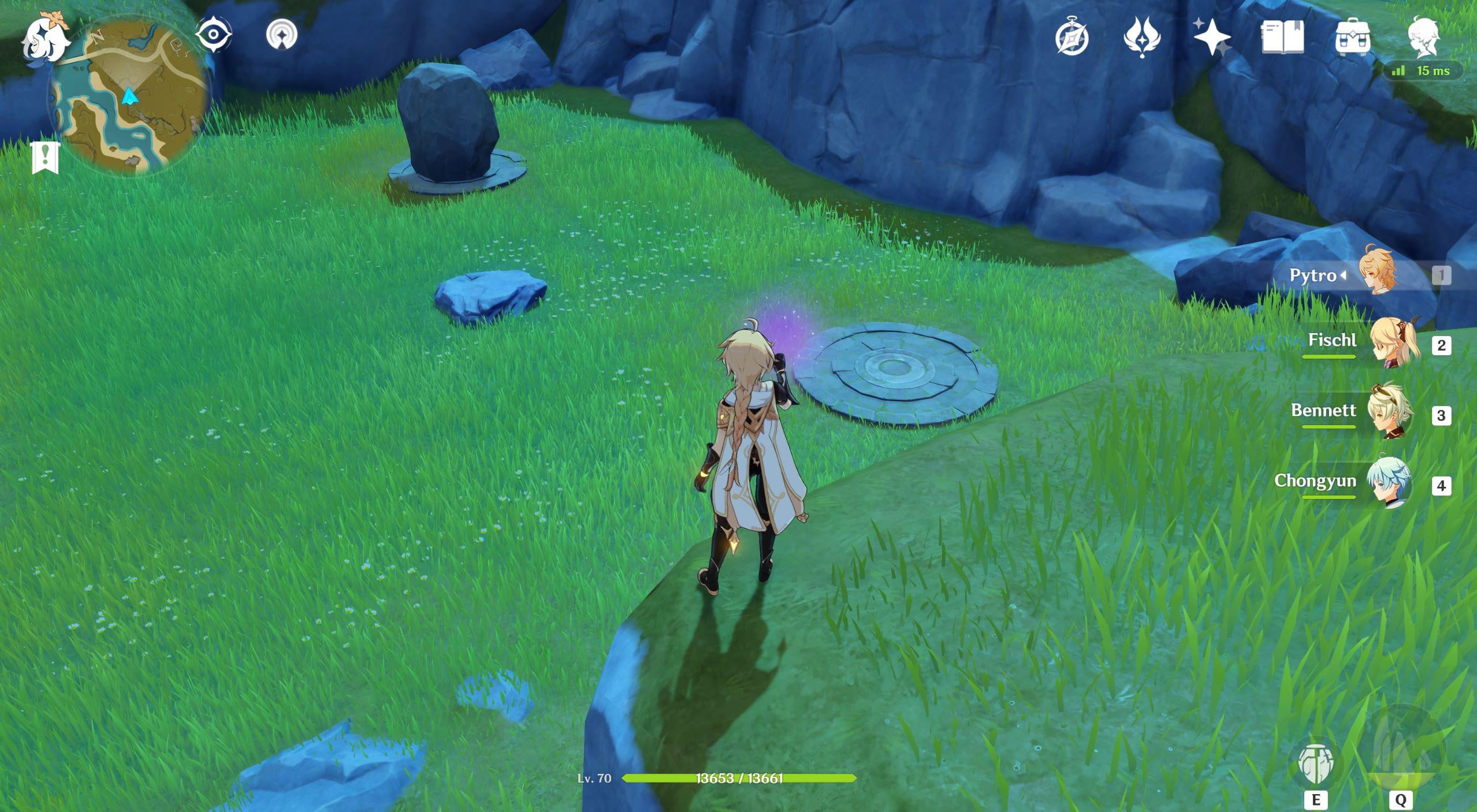 In any case, I hope my small guide could help you guys a little bit. It’s my first time making guides so be open about what I could improve. If you have any questions, I will try to answer them all.

This is NOT an Alienware Laptop!

Valorant A oversimplified guide to choosing guns for noobs and newcomers

Apex Legends – How To BHOP On Console | Master XBOX...