Hi there everyone! Today I am going to share a guide on my approach to Floor 7 of Spiral Abyss. I also have a video guide talking about the same context that I will link below

The team that I am using consisted of Diluc, Fischl, Bennett, and Chongyun as non f2p characters. However, there are replacements that can work, such as Xiangling for Diluc, and another main damage dealer instead of Fischl.

Feel free to leave a question and I’ll try my best to help you set up a team. 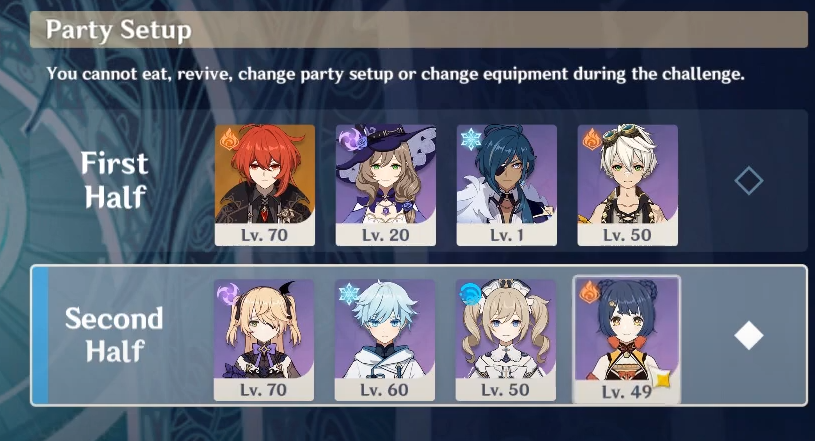 Below is an overview of the enemies 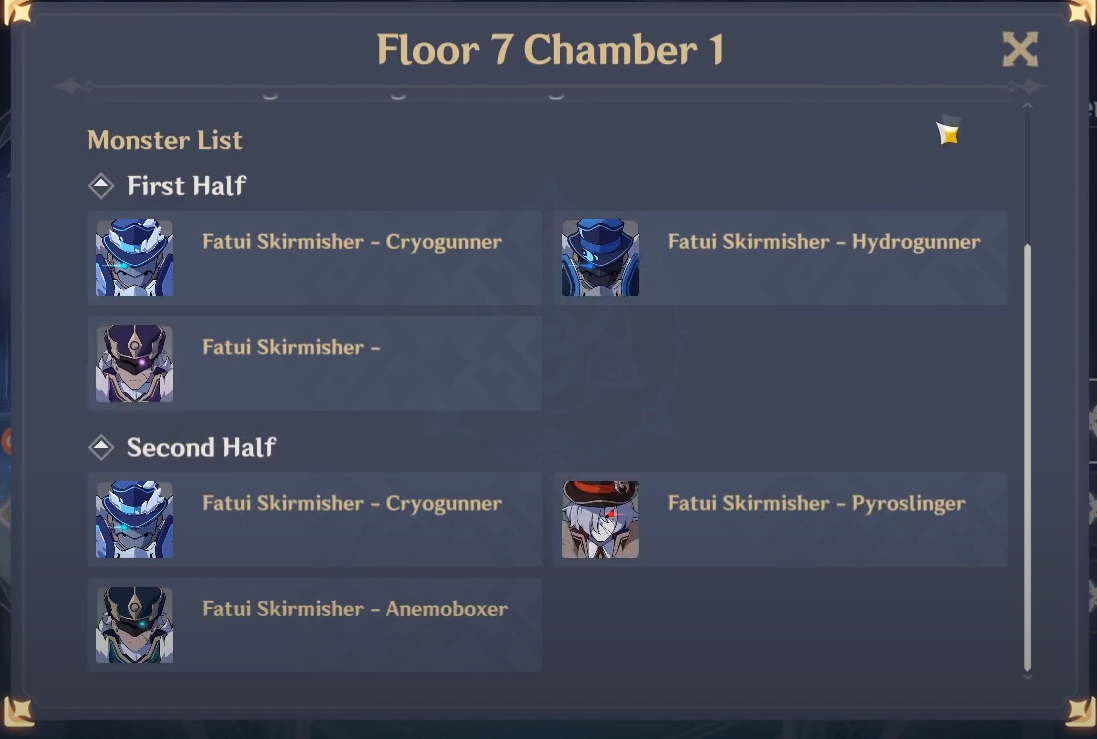 During the First Half, focus on the Hydrogunner because he heals the other skirmishers’ hp if they took damage.

You will also get frozen because of the combination of Hydro and Cryo elements. By prioritizing the Hydrogunner first, we will have a much easier time dealing with the Cryogunner after.

As soon as the Cryogunner dies, quickly locate the Hydrogunner and do as much dps as you can before he casts his Hydro shield. Focus only on the Hydrogunner until he is defeated, then move onto the Cryogunner. Make sure to utilize Kaeya’s elemental skills to break the Lightning Skirmisher’s shield here. When their shields break, they are momentarily stunned in which you can maximize your dps.

The Gunslingers (Pyro or Geo) takes a long time to shoot, so take out the Cryogunner first with your main dps. We can deal with Pyroslinger’s shields with Barbara’s elemental attacks. After the first waves of mobs are defeated, turn your attention to the Anemoboxer. He has the highest mobility out of the three skirmishers. After the Anemoboxer is defeated, the Cryogunner and Pyroslinger should be easy to deal with.

This Chamber have the same concept as the Second Half of Chamber 1, focus on the Cryogunner first then the Gunslingers.

In the first wave, if you didn’t bring a claymore weapon type character, focus on the Geoslinger first. In the second wave, focus on Anemoboxer.

In this chamber, the order of priority is Hydrogunner > Anemoboxer > Lightning Skirmisher

Always deal with Hydrogunner first because of his heals

Things to look out for in this chamber

Since we focus on Hydrogunner, you will notice the Anemoboxer runner up to shield his fellow skirmishers with a giant shield or run in front of you and shield. If you attack the shield when his shield is up, he will start a suction type move that will hinder your mobility, and also allow other skirmishers to damage you.

Straightforward stage with the around the same mobs. Focus on Anemoboxer first.

This was my approach to the floor because I was trying to get 9 stars. You can always go back to a stage if needed to improve your stars.

In my opinion, the first chamber is the hardest of the three. If you can clear Chamber 1, you are well on your way to clearing this floor!

Feel free to ask any questions regarding team comp, mechanics, etc. and I’ll try my best to answer them!

I also have a video guide below if you prefer video and visuals.

Thank you for reading and I hope you find this guide helpful!

Genshin Impact Guide towards making a DPS Traveler By: buttsecks42069

Genshin Impact How much artifact set bonuses are actually worth compared to crit substats (math guide) By: supenut178

Overwatch How to Improve for Low Rank Players

Clash: Everything you need to know! – Rainbow Six Siege

Overwatch Some Dudes Guide to the Overwatch League 2021 By: Medaiyah

Tips on how I set up my WoW to improve my...