First off I want to stress this: YOU WILL NOT BE USING ONE TEAM FOR ALL CONTENT IN THE GAME. It does not matter what level your characters are, or what gear they have, countering/combining elements/effects with characters will always be more valuable than gear.

First off team comp for doing things in your world could literally be anything it doesn’t matter (unless for puzzles or removing shields). However, to do abyss floors it most certainly does. To do stages of Abyss Floor 5 and up you will need two teams. This means as early as you can you should be preparing to use two teams and thinking about what to build. For these teams you will want a main dps (your carry), a healer, and two supports. Let’s go over the options: 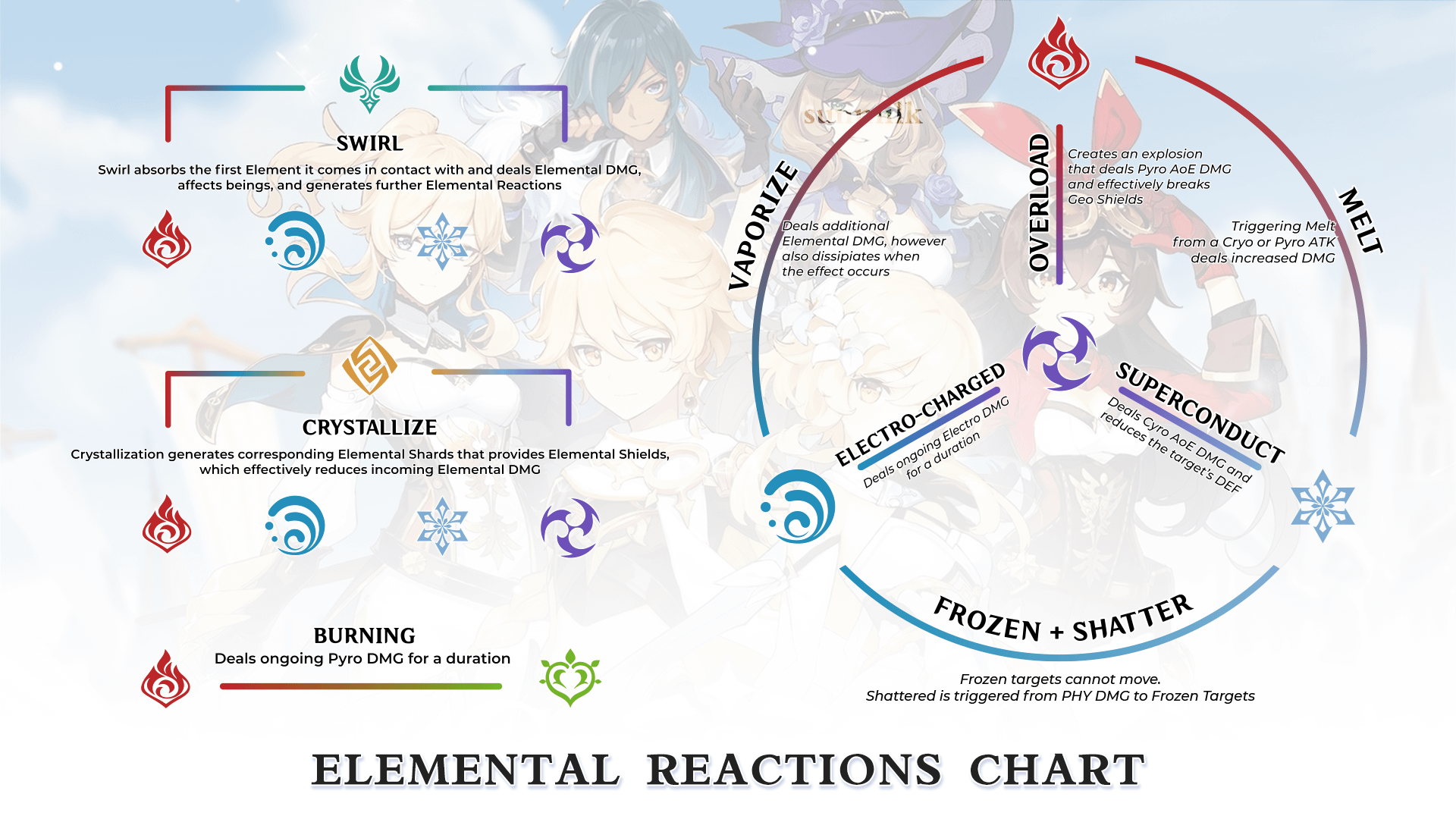 For main dps we have many options. For my whales or lucky F2P players, we have the big 3:

These 3 are the best carries in the game, if you have any of these I would highly recommend using them.

Now we also have some other very viable options in terms of 4 stars:

First off I want to say mathematically melee carries will always be better than ranged carries but that does not mean ranged dps is necessarily bad. If you are F2P or a dolphin I would strongly suggest you save that starglitter for Razor. Why? Because not only is he the best physical damage carry in the game, but he also is super strong with Kaeya. Yes you read that correctly, Kaeya, your shitty f2p character, actually has a purpose now! Razor electro procs + Kaeya ice procs generates superconductor. This allows phys resistances to be shredded for 8 seconds on proc! This effect is something that all physical carries should be running on their team, as any other elemental reaction only boosts elemental damage and not physical.

What carries you want to use is up to you, but I wouldn’t recommend choosing something that is mono-elemental such as Klee and Diluc. However this is different with Keqing and Razor as Razor’s electro damage is more of a side piece.

HEALER
For our healers we have:

This is up to you, however I would say a must use if you have is Qiqi. Not only is she ice but her lvl 60 bonus talent is insane! She has a chance to generate her talisman on hit, giving your main dps to practically leech through any damage thrown at you while the talisman is up. Remember not one healer will be paired up with a mainly dps always, they will often swap depending on what the floor demands. Obviously if you only have Barabara and Noelle, well use Barbara and Noelle.

This is where your team comp will switch a lot depending on the floor you are doing and who your main dps is. If you are fighting a lot of pyro/ice slimes you will probably want Lisa. However, if you are fighting a lot of electro slimes maybe Lisa wouldn’t be the best choice for that comp. It’s really a game about rock paper scissors, however electro is probably the most versatile element in the game atm. It will almost 100% be good on any team you throw it on because of how many elements it pairs with.

Now with Geo and Anemo its a bit more complicated. Geo can be good because among other things, claymores and fire+electro, geo will break geo. If you are fighting anything with Geo shields you will definitely either want a geo breaking character. However, that is not the only thing geo is good for. When geo reacts with any other element besides anemo, it will create a crystal that you can pick up which will create a shield of that element it reacted to. While this by itself is not the most useful thing ever, it does enable the Petra artifact set. I believe the petra artifact set is the only real reason to be using geo currently. The 4 set bonus gains 35% more damage of whatever element you picked up (mistranslated on actual artifact text, dw about it). So for Diluc thats 35% more pyro damage. This is an insane buff, which is why if you can fit a geo character (besides Noelle, she takes too long to proc geo on elements), and you have the petra set bonus, absolutely do so. This turns geo traveler and ning into god-tier supports.

Anemo is innately good because of the insane cc all anemo characters provide, however where anemo supports really shine is with the Venerer artifact set. The 4 set bonus: when anemo procs with another element it shreds elemental res of that element on the opponent. This is a big damage multiplier and an incredible boost of damage. There is no reason why you should be using any other set on anemo characters.

Guidelines on who to build:

In general a good rule is to just pick two electro, two fire, two hydro, two ice and have the ability to break geo on two separate teams (again those are: claymores, fire+electro, and geo itself). Throw in a geo and anemo where you feel like and you can’t go wrong. This a good guideline because if you can have two of every element then then no matter what you will be able to counter any element on either side of abyss floors.

Did I miss anything or is anything confusing? Feel free to ask or tell me, I will try to answer any and all questions

Genshin Impact ATK%, Diminishing Return and Why only stacking DMG% is not always the Answer By: JH2z

No Man’s Sky NEXT GENERATION Update! ALL Information for Playstation 5...

How to Craft and Upgrade your Legendary in Shadowlands – Comprehensive...

Destiny 2: How to Get The Lament Exotic Sword & Cloudstrike...

Skip to toolbar
We use cookies to ensure that we give you the best experience on our website. If you continue to use this site we will assume that you are happy with it.OkPrivacy policy