I recently got a couple of questions from various people who want to run a DnD campaign in Runeterra but were getting overwhelmed by all the various languages and had no idea on where to start to make the language-aspect of the campaign realistic and fun. This post will serve as a place to find all the information condensed into one post for easy access. No more searching every nook and cranny for some information ! So let’s just get right into it.

Which languages are there?

The language tree illustrates which languages are spoken currently in Runeterra. 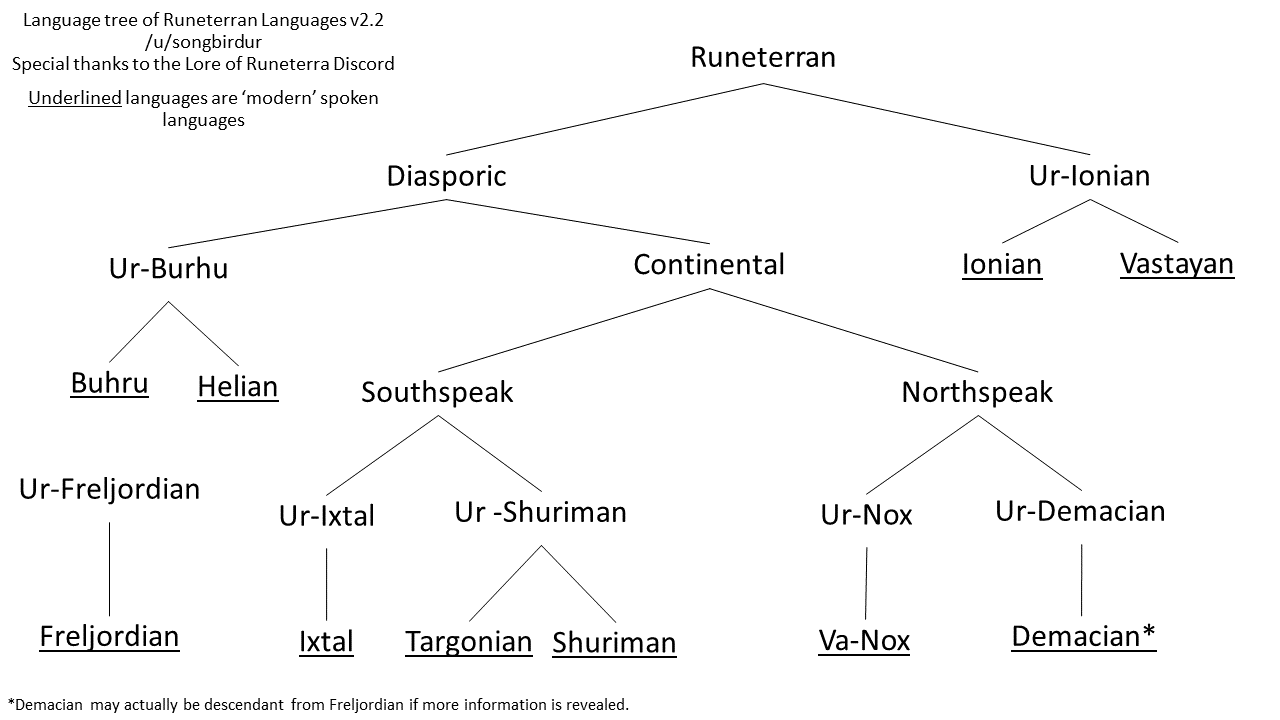 The creatures of the Void do not have a human language. They are part of a hive-mind, which isn’t anything that resembles language as we know it. The Yordles have their own language as well.

Bilgewater, despite being situated near plenty of Buhru speakers, does not have one uniform language. It’s a trading hub where you will find pretty much any language you want to hear. Va-Nox would be the common language though (more on that later).

Helian is the language spoken on the Shadow Isles before the ummm, shadow things happened.

Ochnun is the language of the dead spoken by Mordekaiser.

Yes and no. The closest to a universal / common language is Va-Nox (Noxian). It is the most prestigious language in Runeterra, and is spoken all along the northern continent, some parts of the southern continent and in Bilgewater. If you want to have a common language to ensure that your players can play easily, Va-Nox is your best bet. The inhabitants of a random Ionian village won’t speak it, but it’s possible that the elder has learned a few phrases or more. It’s the same situation in Bilgewater. Va-Nox will easily get you around over there, but stray off into the mountains and some Buhru knowledge would be required. Lastly, Shuriman gets you wherever you want on most of the Southern part of the continent.

Are some languages mutually intelligible?

This also depends on the background of your character of course. An Ionian trader probably knows some Va-Nox phrases. Keep this information as a guideline! It’s your campaign, so you know the characters best and are in the best position to decide.

What about writing and reading?

Literacy is something that we don’t know a whole lot about. The Va-Nox (or Ur-Nox) script is the only script that we have a significant information about. We have hints of an Ionian script (though it was composed of cyrillic and other real-world symbols), but nothing substantial.

This one is up to you in the end as well. Think about your character’s background and decide on whether they can write or read. Note that people living in cities have a bigger chance to be able to read then a tribe in the Freljord.

Can you translate a sentence for me that I need for my story?

We don’t have enough information to create fully working versions of the languages (except Freljordian). However, if you would like me or somebody else from the team to translate a few sentences into a language of your choosing for a puzzle, or to help out with immersion in your DnD game, we can get pretty far. Feel free to hit me up here, on r/Runeterran or on twitter at @/Songbirdur and we’ll see how far we can get <3

If I missed anything important feel free to point it out and I’ll edit it in. I hope that it’s a useful resource for anyone wishing to run DnD in Runeterra.